A song contest that rose the Festival Kanzunetta Maltija from the ashes, Muzika Muzika was a revamp of the festival that had stopped in its tracks from its onset the year 1981. The televised competition was missed, and it was the perfect opportunity to once again promote the importance of and the appreciation towards the Maltese language.

Despite the hiatus – upon its return, songwriters, lyricists and singers flocked with their submissions for the festival to be amongst the lucky 20 that would make it to the semi finals in the hopes of claiming the winning prize! 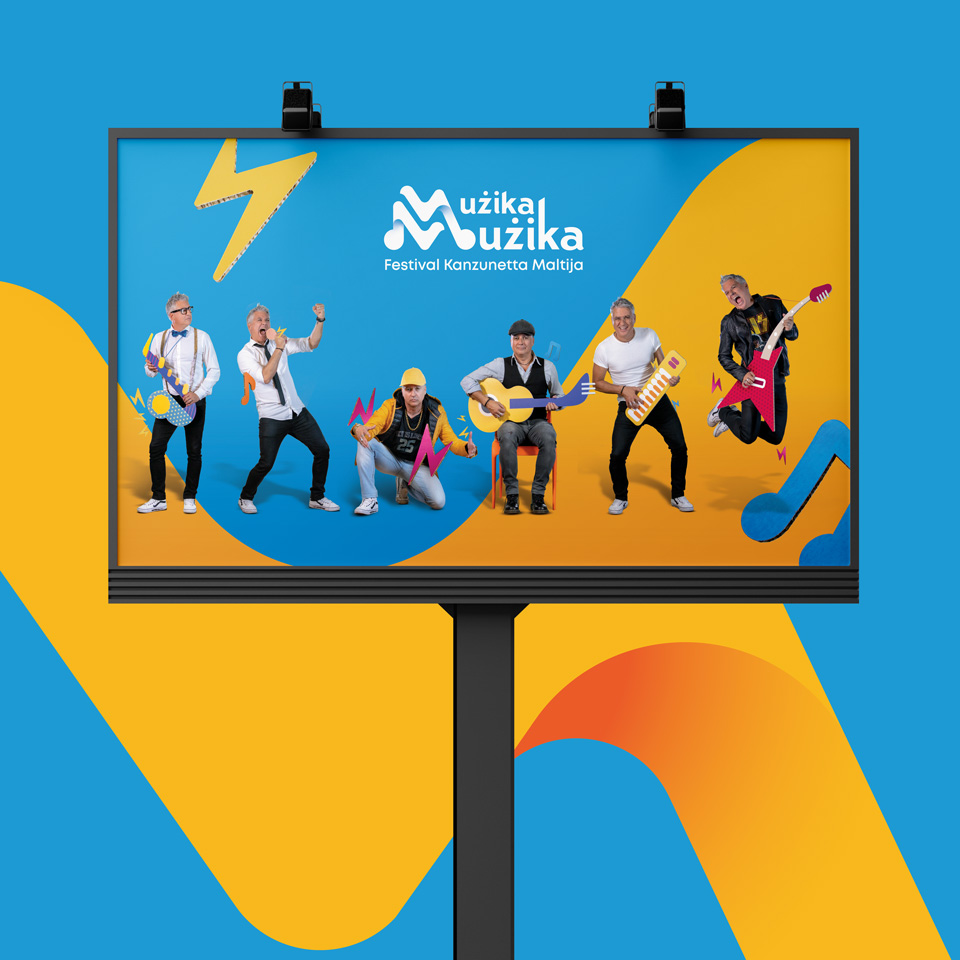 The project was split into two phases. The first initial phase was when we were handed with the task to announce the relaunch of the festival. However, more importantly, we were handed with the task to the target audience made up of songwriters, lyricists and singers. The goal was to receive as many submissions as possible, for their songs to be shortlisted for the competition.

Something that was of great importance for the festival organisers this time round, was to receive submissions from the entire spectrum of genres present on the Maltese islands – to break away from the former notion that only the classic ballads filled with melancholy were welcome. From folk, to rock, to pop, we wanted to make sure with our first campaign that it illustrated that all genres were welcome to the revamped Festival Kanzunetta Maltija! 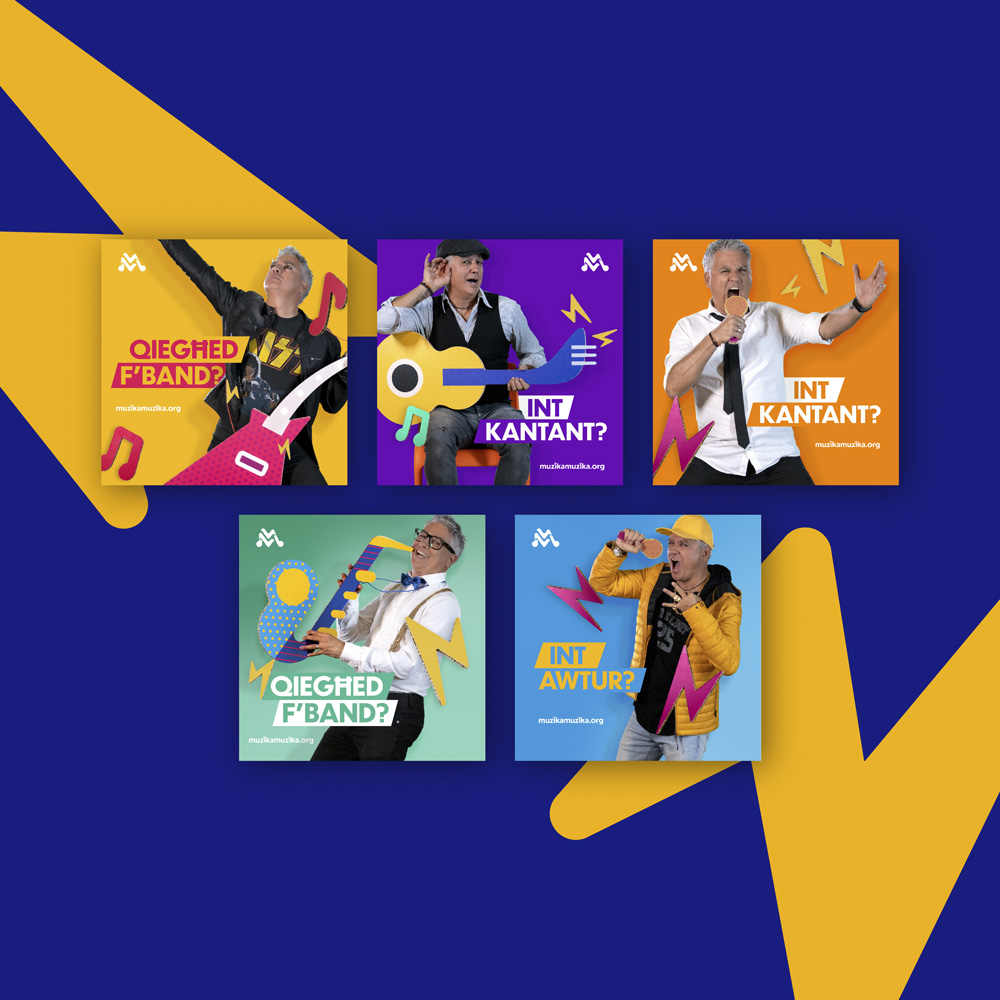 Festivals Malta engaged Gianni, a popular radio host on one of Malta’s leading radio stations and popular local figure, to be the face of the campaign. With the use of vibrant colours, fun transitions, and Gianni’s animated personality – we were able to create an eyecatching campaign that was translated not only onto digital platforms, but also across all traditional media.

As a result of this campaign, a total of 148 songs were submitted, where then 35 songs were selected to then once again face another cut, to the final 20 that would then make it to the televised song contest on Malta’s national television station, TVM. 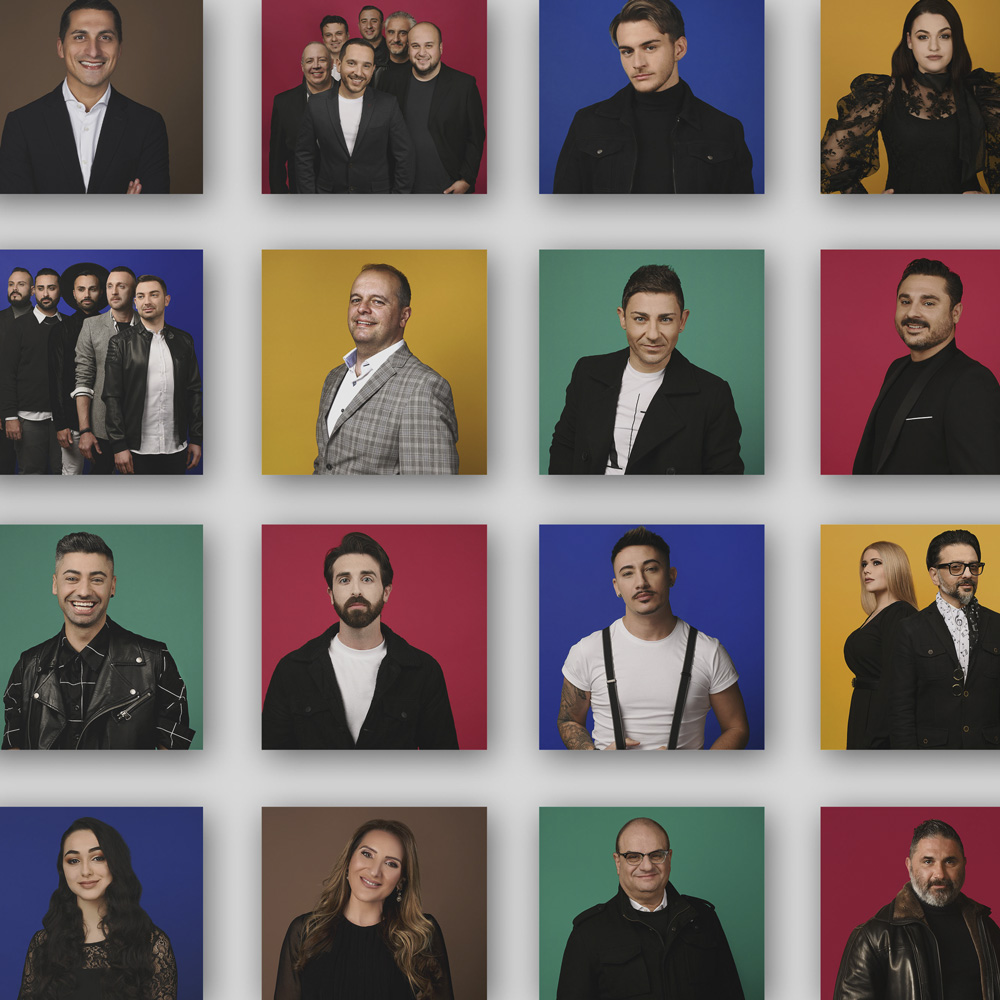 The second phase of the campaign was to promote the final 20 artists and to attract an audience to tune in and follow the festival on television. Once again, we had to visit the drawing board to create an even stronger campaign to get positive numbers for the viewership of the festival. The festival was originally planned to be televised with a live audience, but due to the pandemic situation, it was safer to eliminate the live audience and have the festival solely televised on three consecutive days as originally planned. 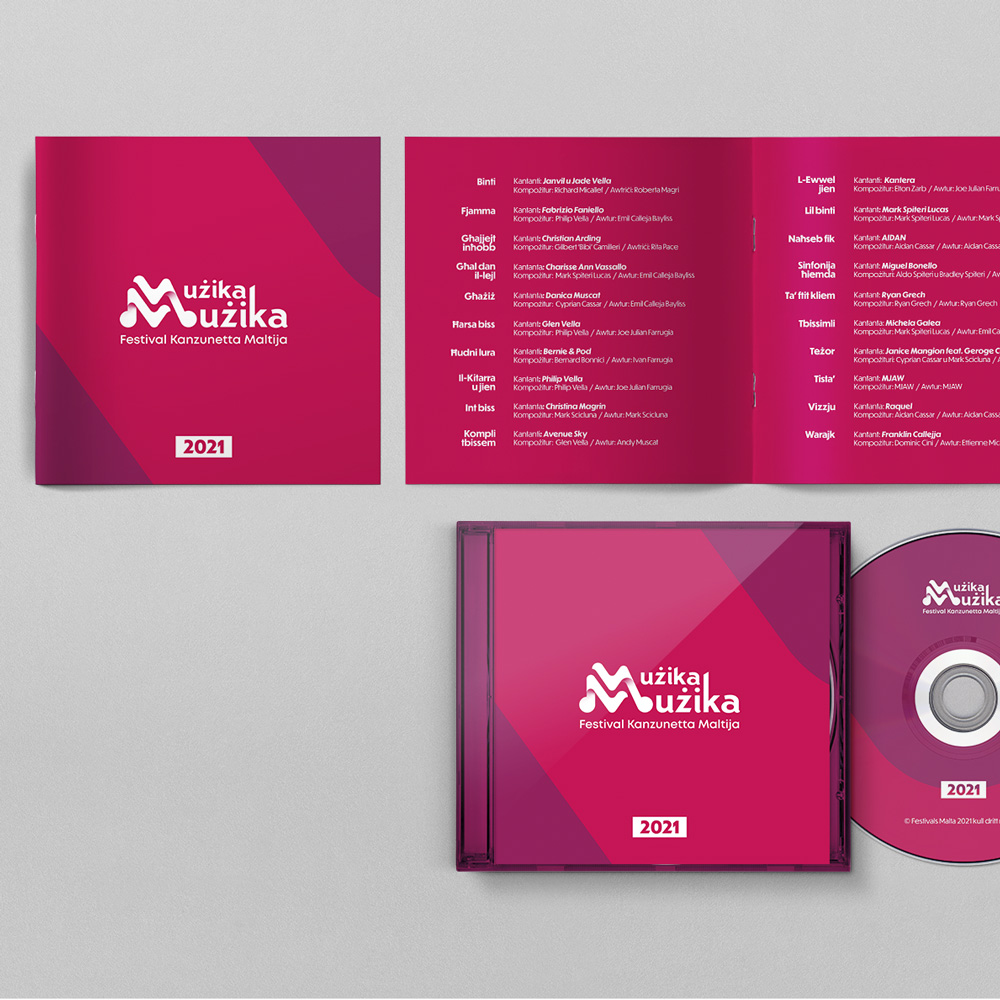 The element of colours played into the second phase again when it came to creating the promotional content for the festival, paired together with a tribute to a modernised musical rendition of the song ‘Muzika Muzika’, that was initially interpreted and won the competition in 1981 by the legendary Bayzo. This time round, the artists who were listed as the final 20 were front and centre for this campaign, and were able to translate our idea of a 30-second dynamic audiovisual performance and promotional campaign content leading up to the festival.

We made sure that more specifically, the two weeks leading up to the song competition, Muzika Muzika was everywhere. From television adverts to bus shelters to billboards to bus wraps. The entire island was well aware that the festival was going to take place, for people to jot it into their calendars to make sure to not miss out on the fun. Especially since there was no song for Eurovision song contest happening, Muzika Muzika happened to be the perfect fit to fill up the emptiness. Every year, the Maltese love a good song festival to chomp on takeout with their family and friends, and play judge via their socials by expressing their thoughts through a number of status and stories.

Talk about having ‘all eyes on me’. Overall, the festival ended up having a total of 320,000 viewers! That is just a little bit more than three fourths of the entire population that resides in Malta! Muzika Muzika was extremely well received by both the contestants and the viewers, all hoping that there would be another edition next year. 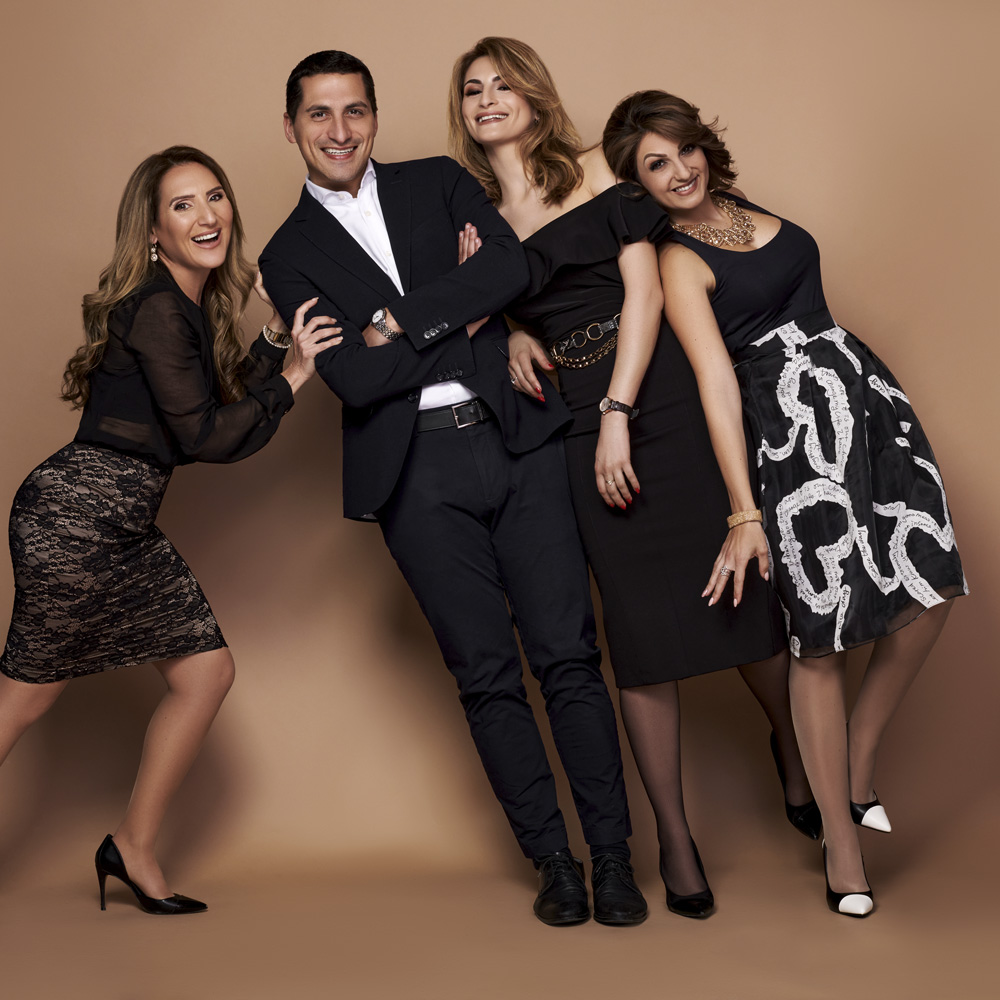 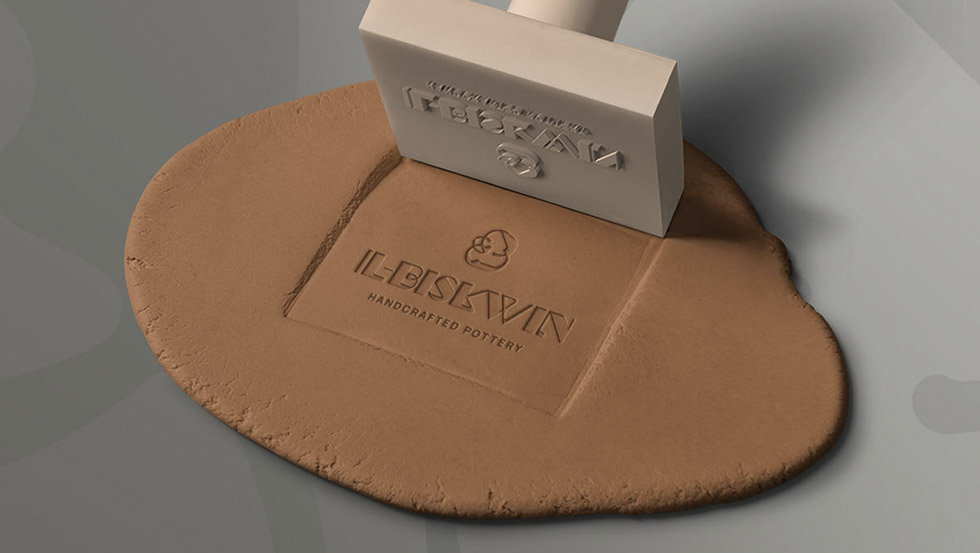 case study.Il-BiskwinIl-Biskwin is a small business of a client of ours who describes himself as a pottery enthusiast on the wheel, exploring different shapes, forms, and glaze combinations. He came to us needing a brand identity that would help him achieve...